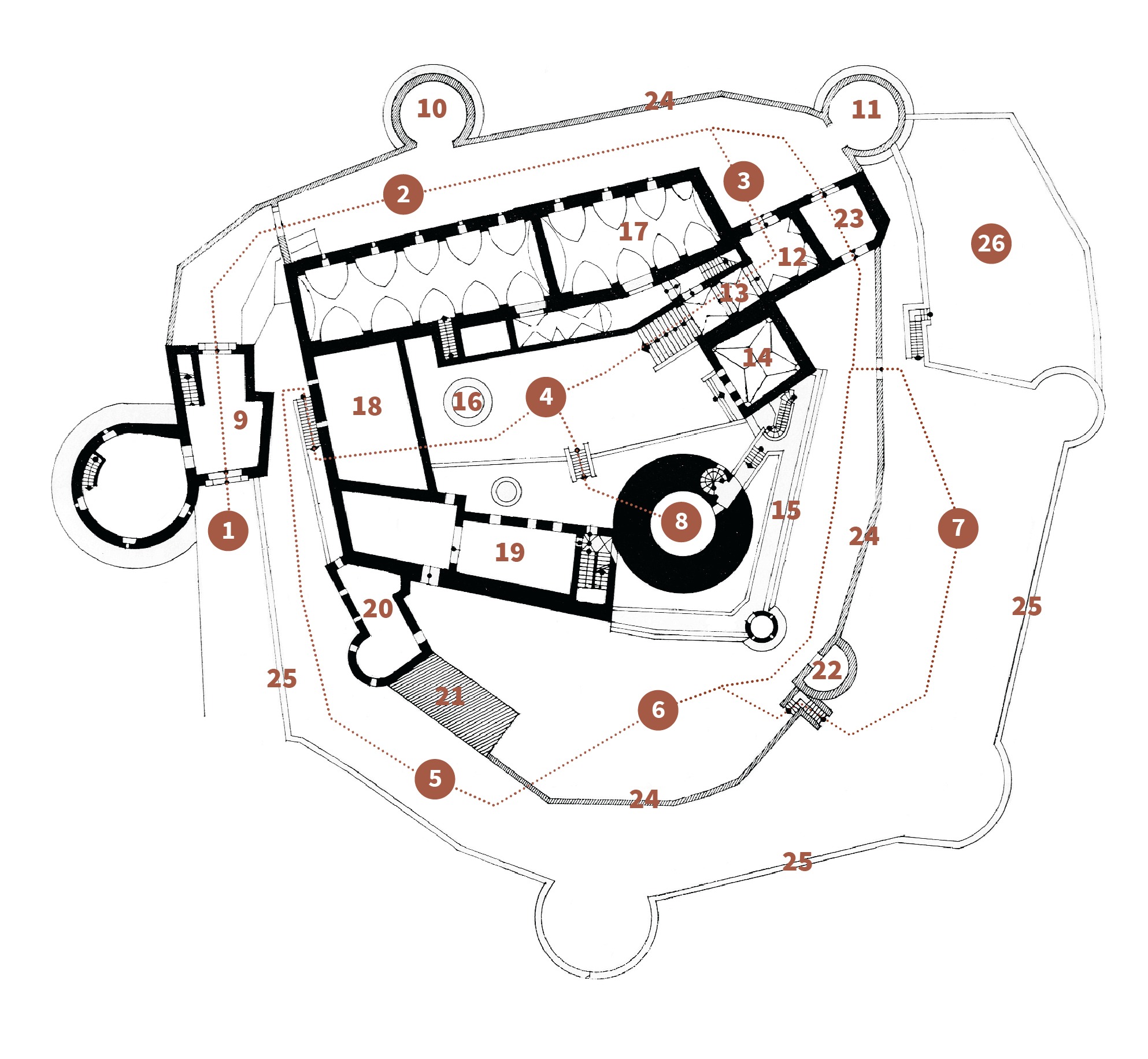 THE CASTLE THROUGH HISTORY

The castle complex first emerged at the beginning of the 13th century, on the site of a much older prehistoric settlement. Initially, it consisted of only one building and a courtyard surrounded by a stone defensive wall. Soon, a mighty tower and chapel were added. In the centuries that followed, other buildings and additional defensive structures were erected. A so-called “concentric castle” took shape, and some parts of the initial castle construction can still be seen within its walls, including parts of the original Romanesque wall aged around 800 years! The mighty castle into which Rihemberk developed over 8 centuries almost completely disappeared in the wars of the 20th century. Its restoration is still ongoing.

THE NOBILITY IN THE CASTLE

The first owners of the castle were the Lords of Reiffenberg, a noble family of presumably Tyrolean origin. They came to these parts around 1230 to be in the service of the Counts of Gorizia who were prominent feudal lords with their seat in Gorizia. The Reiffenbergians gave the castle and the settlement below it the name Rihemberk, which survived long after the family became extinct in 1371. The Lords of Reiffenberg served as ministeriales of the Counts of Gorizia and as such were given governance of the fertile Branik valley and the edges of the Karst plateau where they built their castle. Gradually, they expanded their influence and lands from the Vipava Valley and the Karst to Gorizia, as well as to Inner Carniola, the Bovec area, Istria, the Friuli region and even Carinthia. They guarded trade routes from the Vipava Valley to the Karst and the sea, a witness to this being the remains of the castle toll house.

The castle’s development was marked profoundly by the noble family Lanthieri, which managed or owned the castle from 1528 until the end of World War II – for more than 400 years! During the turbulent times of the 16th century, the medieval castle was significantly fortified with a number of towers and platforms. In the middle of the 17th century, the castle was further transformed into an eminent and modern royal residence, leading to the diverse castle complex we know today and that was already known for its grandeur in the 18th century. The lavish Lanthieri palace was almost completely destroyed in the wars of the 20th century. Its restoration has been underway for decades and has not yet been completed. In 1910 the last male descendant of the Lanthieri family, Karel Friderik, died. His only heir was his daughter Karolina who married Erdmann von Levetzow. As a mark of respect for his wife’s family he added her surname to his own. The Levetzow-Lanthieri family owned and managed the castle until the end of World War II.

In recent decades, the abandoned castle has become a home to new mysterious inhabitants – bats. Expectant females arrive at the castle in spring and give birth to one (or rarely two) pups in summer. In the daytime, the nursing females can be found in castle towers hanging upside down with their young clinging to them. At first dusk, however, they soar off to nearby feeding grounds, where they hunt insects, spiders and other arthropods. In autumn, they fly to their winter homes, which are most often in subterranean caves. Among the 28 species of bats currently living in Slovenia, 9 species regularly inhabit Rihemberk Castle, making it one of the country’s most important refuges for these small mammals.

IN HARMONY WITH NATURE NATURA 2000

Like a mighty defender, standing between the Vipava Valley and the Karst, Rihemberk Castle is surrounded by diverse and well-preserved nature, protected in two separate Natura 2000 areas: the Branica Valley and the Karst. Diverse habitats are home to numerous rare and endangered species (beetles, fish, amphibians, dragonflies, butterflies). The area is of particular importance for the Geoffroy’s bat (Myotis emarginatus) and Rihemberk Castle is the largest known maternity roost for this species of bat in Slovenia. The area is also important for the Italian agile frog (Rana latastei) for which this is its easternmost habitat. For the preservation of the bats and their natural environment it is important that we do not illuminate the entrances to their roosts and that we do not disturb them in their dwellings with various activities. We respect this in Rihemberk Castle where some parts are reserved exclusively for the bats. More at: www.natura2000.si